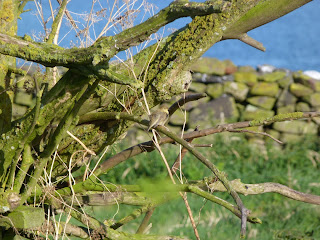 A Willow Warbler has a minute on Inner Farne 'stick'.
The time has come, wind have changed, frontal systems occluded, in, on and around Farnes waters and unfortunately unlike Newbiggin down the road we cant boast any wing-barred phylloscs. However we can (or could) boast a wing-barred finch! Let me set the scene.

Since my last posting I have become a resident on the mighty Brownsman. Traditionally this is the island of rare (or it is at least perceived to be – come on the Inner Farne!). Bird passage since my arrival has remained low however a few Willow Warbler and a Sedge Warbler have been about recently besides wadery stuff like Common Sands. 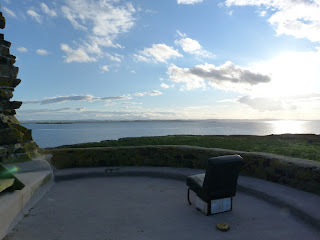 Brownsman Obs.
This morning dawned easterly with bright sun so didn’t seem promising but Greenshank (infrequent at the moment) meant hopes were sliiightly elevated. As we walked the Veg Patch area a medium grotbrown finch kicked up from near the pond  – Rosefinch! Alas it immediately carried on, and on, and on, and on…well north. Ciaran stayed on it til it was beyond a spec. First scarce of the autumn only went and pissed off. Damn!
So grotfinch showed very badly, time for something that showed VERY well. Upon examining last nights trap a few minutes later we struck gold with a moth that’s near enough top of my want list – Portland Moth! This snot coloured crippled showed very well in a pot for the remainder of the morning. 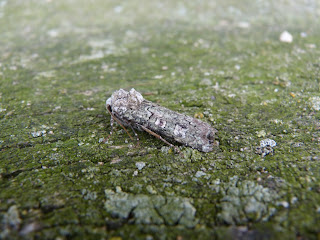 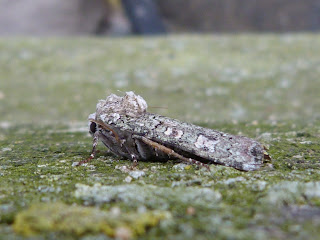 Beside that excitement very little occurred, a Reed Warbler flushing at 0.5ft range was mega rare while a Willow Warbler that dropped in at dusk gives us hope for tomorrow. Let’s bury the finch!
Other bits today included a Bonxie munching Lesser Black-backs in Staple Sound and some waders (Barwits, Dunlin, Whimbrel..).
Anyways here’s another pic of the Portland Moth cos it’s a ‘belting stonker’. 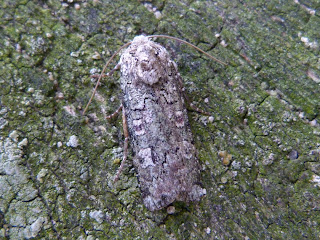 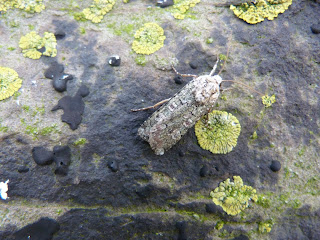