Dub here, opening up a can of rare in your vicinity! 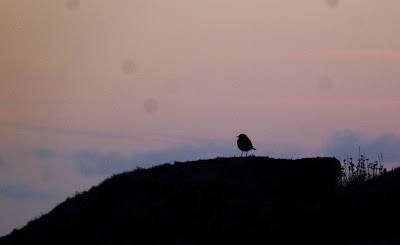 A week ago today I stumbled across a distant wheatear, that with due diligence, turned into a hyper-erectile Isabelline Wheatear! Read my account below...can't be arsed to write it again!
http://www.rarebirdalert.co.uk/v2/Content/Finders_in_the_Field_Isabelline_Wheatear_St_Marys_Oct_2015.aspx?s_id=1035197969

So feeling thoroughly jammed out of my face we hit a magic weekend where low cloud dropped a sweet array of birds! Starting with my classic cliché 'small large pipit', almost certainly a Blyth's by how it was sounding mega weird and that, two calls and all. However I had my hands full rescuing a Cormorant so couldn't nail it. Just as well the Cormorant was found dead the following day, having infested me with lice and no sign of the titillating pipit - tilipit? So all round win.

Sunday dawned murky and rare. Flyover Hawfinch and Serin garnished a Michelin fall of scrace birds with Lesser Whitethroat, Osprey, Firecrests and all sorts getting into my face. However news of a Red-flanked Bluetail on Agnes, and transcontinental Siberian mythgasm of a vagrant bird. So. I calmly went to Aggy and enjoyed 'on the knob' views of this fantastic blue tinged door-unhinger/ 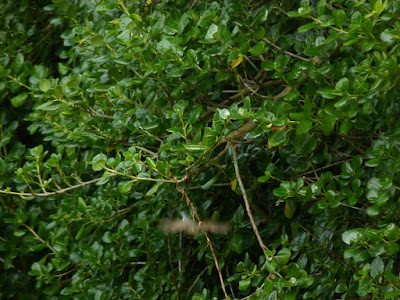 A bolt out the blue! 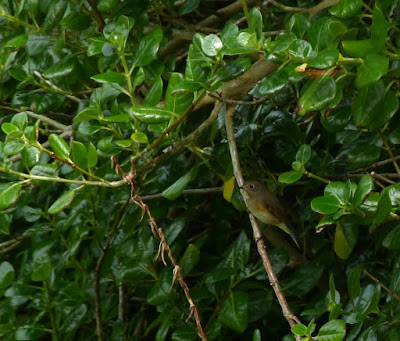 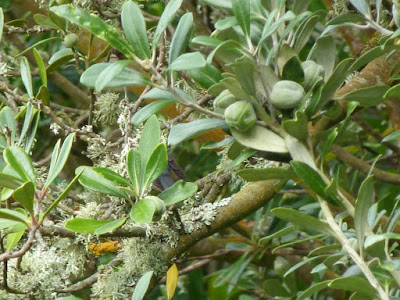 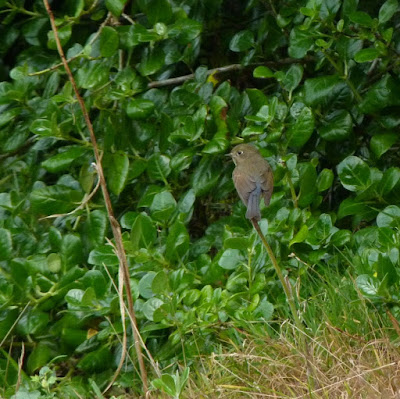 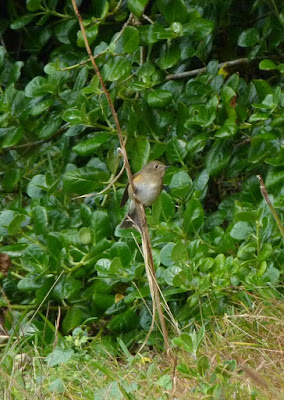 Belta!!
As if this wasn't enough the following day heralded Radde's Warbler in the Morning then Blyth's Pipit in the evening! Shit is getting eastern. Soy eastern. HAHAHAHAHA. Get out.﻿ 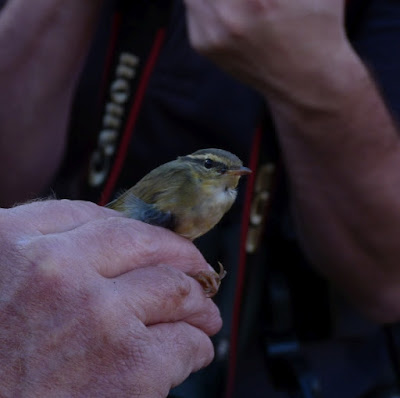 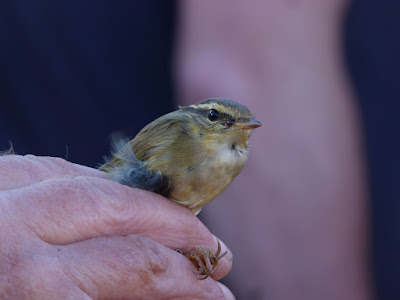 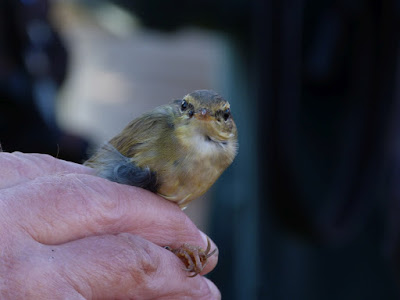 Here's looking at you crippler! 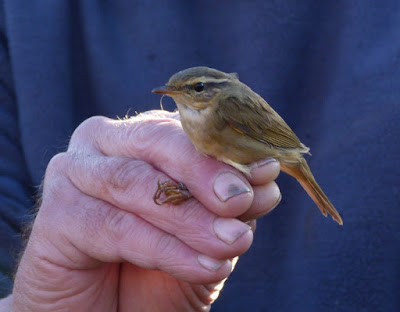 Some people say they don't like looking at birds in the hand, but it's a beautiful bird about to be released - it could by up your ass for all I care! With sexy consequence's? Shudder.
Anyway back to the job at hand. Here's a very poor pic of the Blyth's showing that, it is, indeed, a small large pipit. Confirmed. 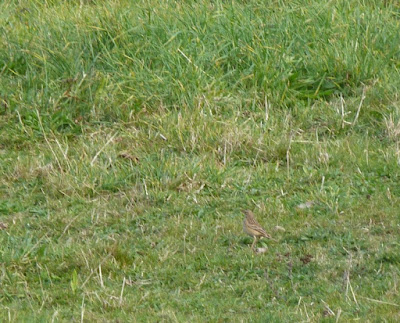 We've caught up! It is now exactly one week since you started reading. Or maybe it just feels like it. Still conditions facilitated a decent fall of Redwing and Fieldfare this morning with thousands pouring into the islands, the largest number I have ever seen! Remeniscent of eastcoast fall days. 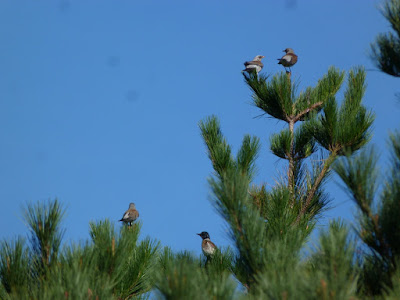 Great to see and hear flocks of winter thrush zipping about. A very evocative experience. Yar.

After some great vismigging my morning circuit at the southeast and east of St. Mary's was fairly quiet bar a few Firecrest so I decided to hit the northwest and re-do Trewince/Telegraph/Pungies Lane after having two Richard's Pipits there the previous day. During this circuit I walked the Content fields in the hope of a Red-brested Fly scoring a wash of thrushes flowing from any berry bearing shrubbery but little else. 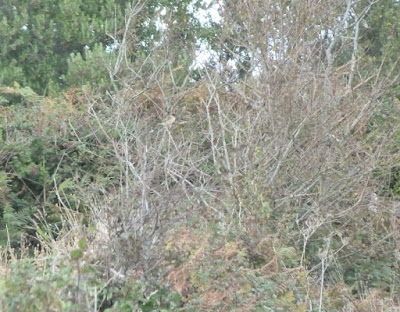 My first pic of the bird, blurred panic written all over it!

However as I reached the fields bordered Pungies Lane I remembered a distant pale Stonechat I'd seen just before the Dick's Pips but lost and forgotten about during the ensuing Dick chase. Hmmm wonder if its still here as I saw a couple of Stonechat flycatching during my approach. Amazingly, there it was! And instead of bright sunshine, some overcast lighting showed it for the pale peach sweet it was! I knew besides the overall appearance that key features were the black auxiliaries (on the underwing) and a pale streakless rump. But would the bloody thing sit still or give me any chance to clock these essential traits? Well no, no it didn't. Rude. After 10mins of disjointed views I felt it was too weird to keep quiet - so shouted on the radio to get people onto such a fantastic looking beast, but also to get some pics of the features as the bird was flying! 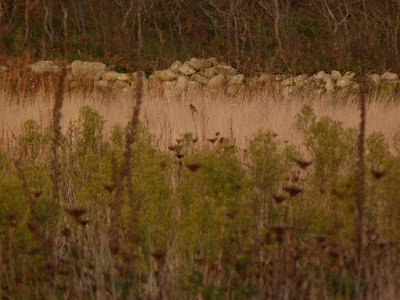 The crowd duly arrived and scored pics of the key features, and eventually the bird allowed that rump to be seen, coinciding with overcast periods where sun glare wasn't distorting the birds colours. The crowds arrived, the bird showed well in its various fields and the sun set, one week on fro my mega chat, with in my opinion, an equally mega chat! 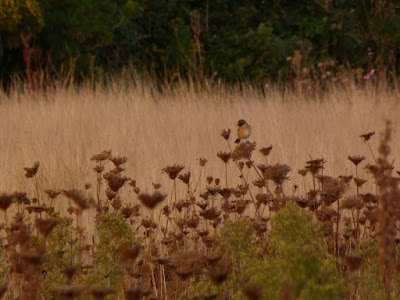 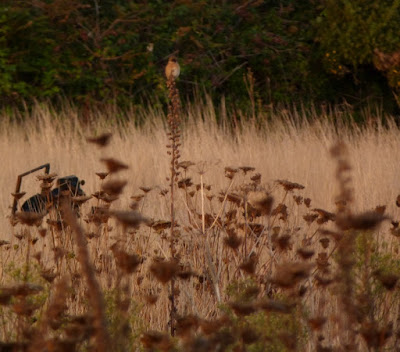 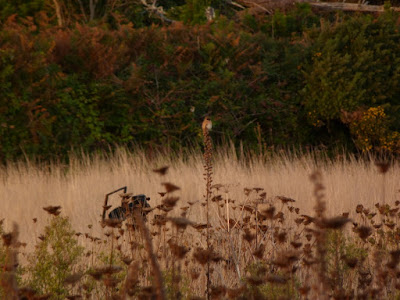 In the sun and against the right background, coupled with my poor skills, show this bird to be deceivingly warm. But at the other end of the field... 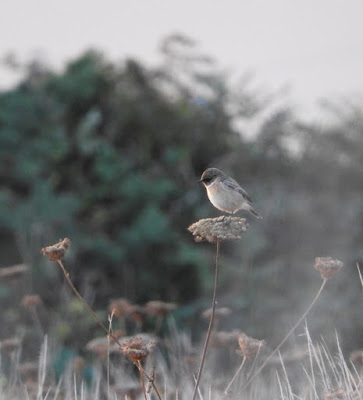 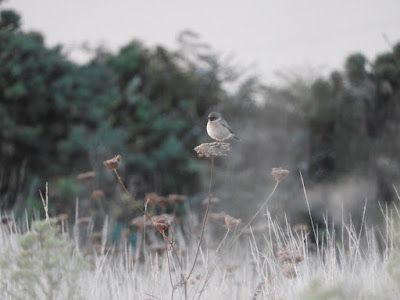 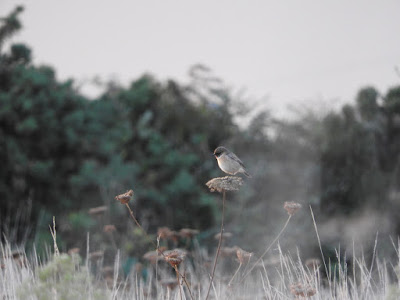 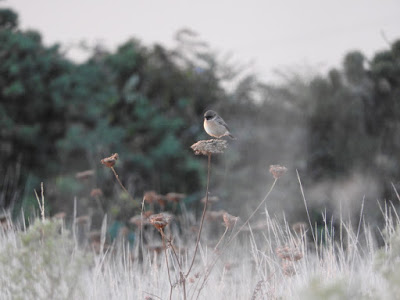 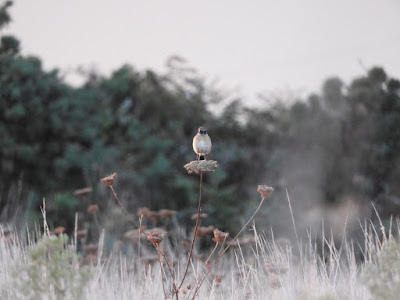 These fantastic pics by Ian Grant demonstrate just how cold and strongly marked the bird was!
A cracking end to a brilliant 7 day period, and oh wait, its easterly tomorrow. See ya in the field
﻿
Posted by Will Scott at 13:13 No comments: