I woke up in Sunday with the previous days events still ringing in my head, and a pretty large Tanager induced hangover. Not sure I ventured beyond the Longstone recording area, but in beautiful sunshine the morning was spent watching 3 Red-veined Darters getting blown away by the increasing southerlies. Amazingly the previous night I found an immature male Red-veined Darter basking in our 15w Actinic Moth Traps light – score! 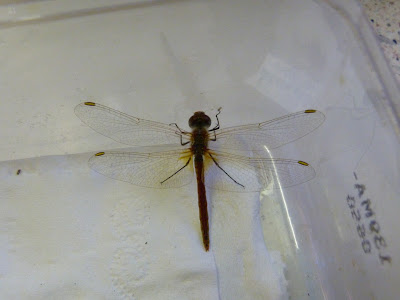 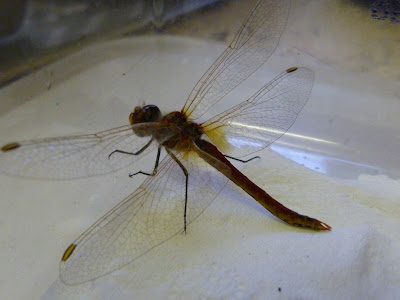 Great to one of these elusive blighters up close and personal. Ya get me?!?
The Darter went on show to the public late afternoon and was enjoyed by those that missioned up in the hideous conditions. We then released the little blighter an he was still hanging out at this site today, as the conditions were awful, not fit for any insect! 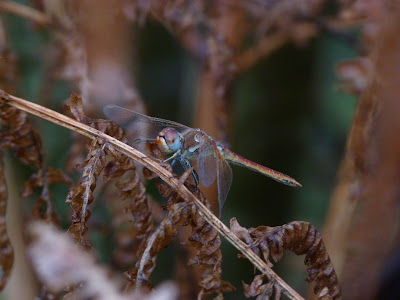 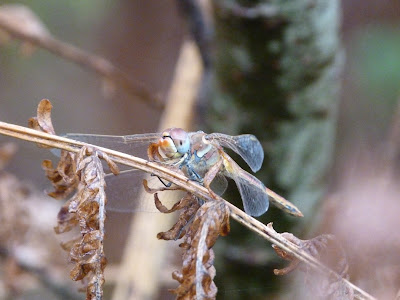 Check out the amazing blue eyes and wings (the red-veins reflect light weirdly or something and can look blue)
However despite torrential rain this morning the winds had completely died off and it was clear some birds had arrived. The garden held 7+ Blackcaps, 1 Chiffchaff, 2 Raven and flyover Merlin, Siskin and Skylark.
News of a White-rumped Sandpiper at Porthellick came across the radio. Ideal! Another new yank in! Note: The Scarlet Tanager on Scilly has been compared to the bird and is believed to be different. I tried to play it cool and wait for further news, which came in quickly – ‘flushed by dog walker’. Damn. So I continued birding Longstone for not much reward in the pouring rain. It reappeared about half an hour later and I couldn’t resist going down, they are brilliant little calidrids. Upon getting on site this particularly birght/fresh looking individual showed well and constantly before buggering off high towards the airflied.  Wheatear and Chiffchaff were also seen at Porthellick but I was there too early to catch the Pink-footed Geese that dropped in late afternoon. 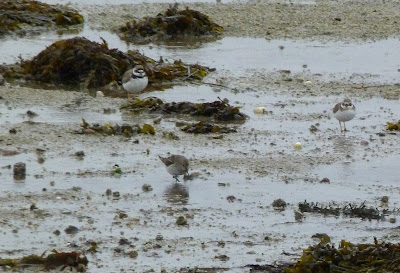 Dont worry this isn't Cornwall, those are Ringed Plovers next to the White-rumped Sand. 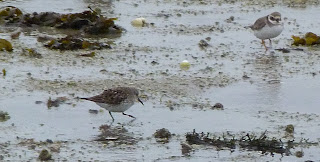 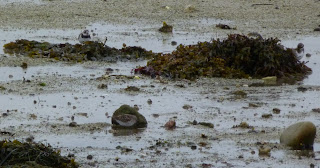 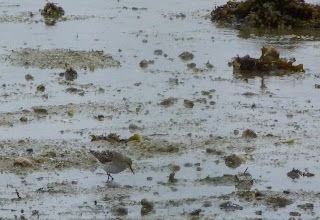 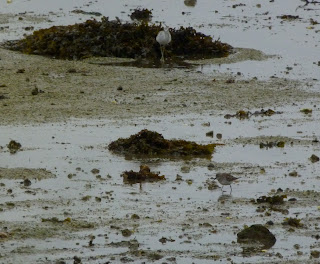 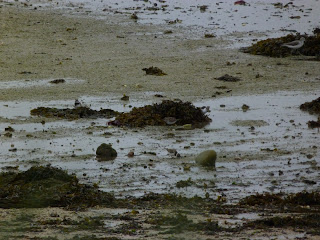 All shot pretty crappy due to lack of skill/poor light combo.
Meanwhile all these hardcore southerlies are just the medicine for mothers – last night we caught 195 migrants including Palpita vitrealis, Vestal (2), Gem and plenty of ‘common stuff’ like Rusty Dot Pearl, Rush Veneer, Dark Sword Grass, Whitespeck and I briefly saw a Convolvulus Hawk Moth flying about whilst checking the traps so there’s plenty of potential kicking off here too – pics tomorrow.
Birdwise what will turn up tomorrow?!
Posted by Will Scott at 11:47