A duo of contrasts could be said for the last two days. Yesterday the weekend’s heatwave gave way to unsettled, much cooler conditions rendering the mind (and body) in shock! But nevermind the weather…here’s the dip stories!
Ironically I’ll start by saying that the 3 Black Kites preformed well early yesterday morning as we waited for the St. Martins boat. They are so good. But it was downhill from there as I then dipped (or should I say waited for hours seeing nothing!) on the Blyth’s Reed Warbler, then the American Golden Plover flushed just before my arrival, then the Lapland Bunting didn’t show, then I returned to St. Marys and dipped on Melodious and Radde’s Warblers – good day! 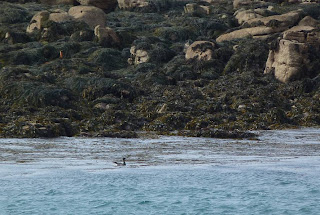 HONK
Did see a Hen Harrier, Brent and Black Kite on Martins but it really was quiet in that breeze. But the Kite’s routine at dusk saved the day as, once again, good views were obtained from the garden. 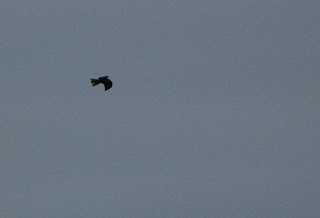 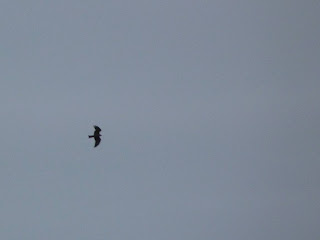 KAKAAAAA
Today the old man westerly had died ish and although the morning was quiet, the sun brought some bits out – like a lovely Yellow-browed Warbler at Newford which showed down to a few feet. However, this afternoon all the excitement hit – lunch was interrupted by a frantic scramble to see 2 Olive-backed Pipits being crippling at Watermill. They were, as they always are – awesome! And brought back those fresh memories from the Farnes! 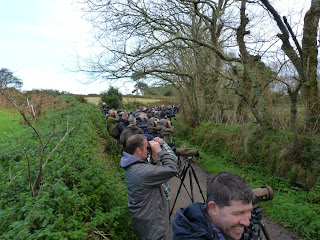 No pics of the birds - soaked them in. Tomorrow for that. Until then here's part of the twitch.
After the dual Olive-backed twitch a wander round Carreg Dhu produced the obligatory fiery faeries – the Firecrest. Stonk! 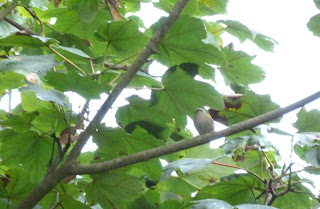 Dont even ask how I fluked this shot.
And then a wander round the land saw no bird in the garden but a group to the SE surely had something so I begun to stroll over when the call came – Red-throated Pipit, Longstones – the buggers! And well done to them! It looked like the dull bird from last week but who knows. All I know is we opened the garden up for viewing and I finally got Red-throated Pipit on my garden list! LONG overdue! 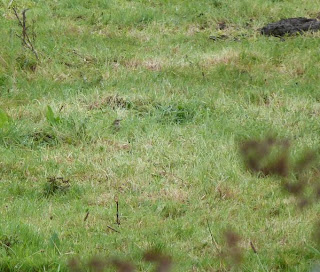 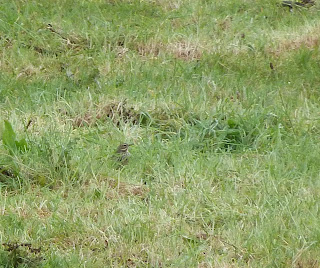 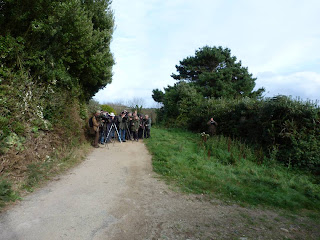 The 'gate birders' cluster shrinking after most had seen the RTP. 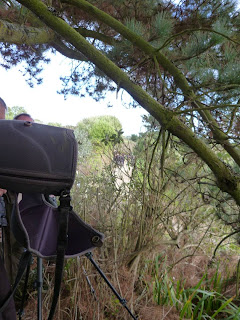 And the 'pine birders' cluster viewing from within the garden. (ps. possible access to that spot IF the bird is present and being difficult from the gate).
And lastly…the weather is only getting better. DEEP southerlies from beyond the are arriving so expect large rare of bird and moth kind: 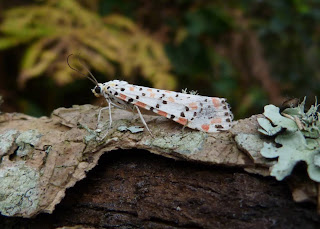 Another pic of the amazing Crimson Speckled. 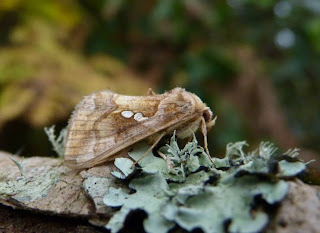 Golden Twin-spot - mega plusia action
Posted by Will Scott at 12:55