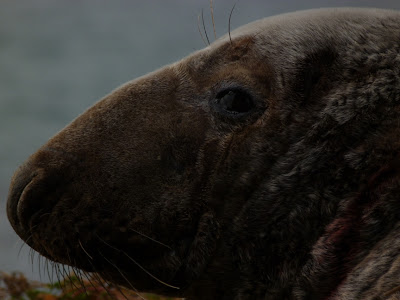 Well firstly I should say sorry for the lack of updates post fall. To be honest I needed some time to re-attach various appendages after they were blown off by our rampant run of rabid rares. Snapping and chewing our optic nerves into crippled soup! (much like the above if given half a chance). 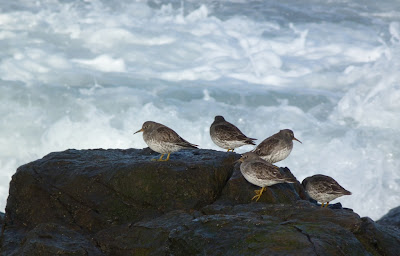 Purple Sand are an ever-present source of entertainment as passage begins to fizzle out.

Lately its been getting wintery. No surprise. I know. BUT. With winter comes changes, and with change come migration! And what do we love more than anything on the Farnes? MIGRATION! Witnessing that shiz first hand is forehead rubbingly good. Unfortunately our old friend westerly has raised his voilent choppy hairstyled head restricted any migration on sea or land and also put a big finger in the arsehole of the autumns main event - Grey Seal monitoring. 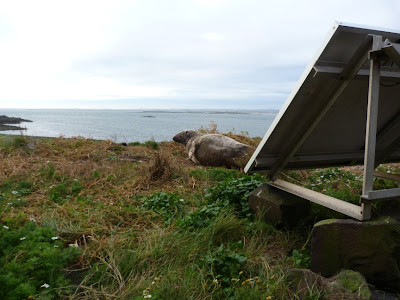 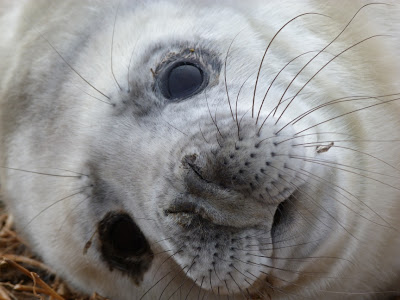 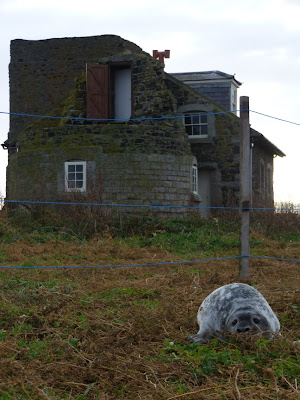 But this is all far to serious isnt it? I am selling out my blog content with all this soft-porn science? Nope, because these little guys are flipping cute. And even the big, smelly, weird sounding and often aggressive adults are very nice too. Especially up close. 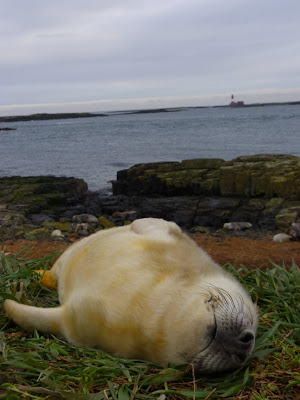 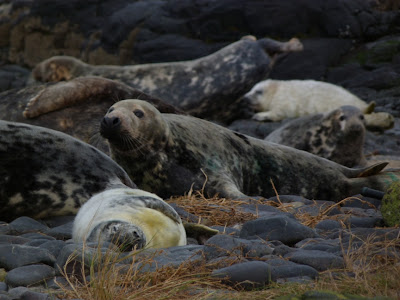 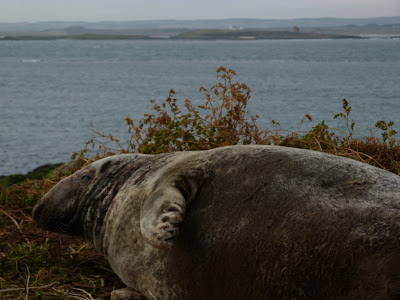 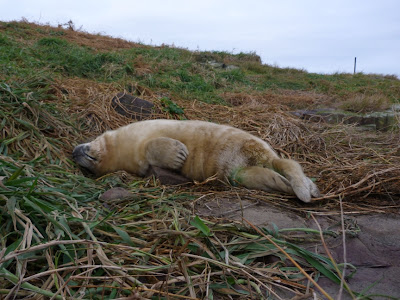 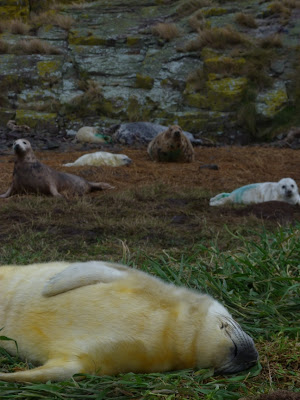 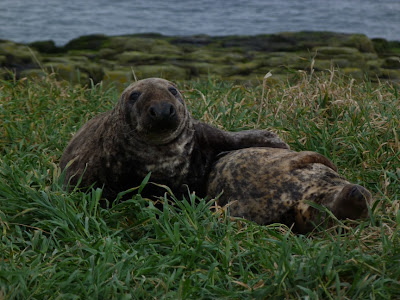 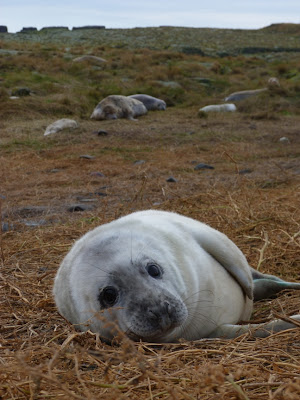 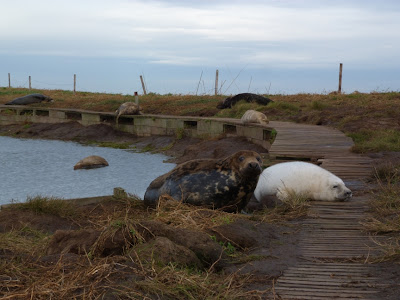 Grey Seals taking over! They're not a bird, they're not rare, but man they are amazing. And such a privilege to be so close.

As you can tell I have been living with the Seals, on Brownsman to be exact, no Curlew Sands or Sabine's Gulls this time though (see http://dub-birder.blogspot.co.uk/2012/09/white-wedged-wonders.html for a dose of pelagic). However despite an island covered in Seals gradually wearing vegetation away, killing gulls and so on there has been some surprising highlights... 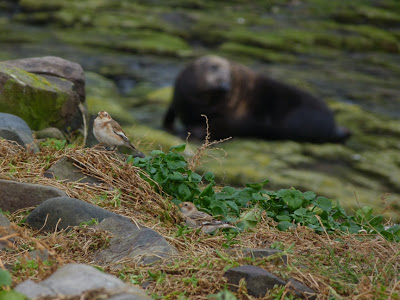 Flyovers include a few Waxwing, the odd Mistle Thrush etc while grounded birds are gradually waining with Blackcap and Fieldfare the only 'new birds' I've seen in days. While the resident Blackbirds are slowly declining due in most part to the plethora of predators bounding about (Peregrine, Kestrel, Merlin, Sparrowhawk). Birds with nuts bigger than any given Snickers bar, that decided sitting amongst the Seals was a good idea include Bonxie (killed by cow seal), Pomarine Skua (soon to be killed by cow seal), Woodcock, Snipe and perhaps most endearingly some lovely Snow Bunting. 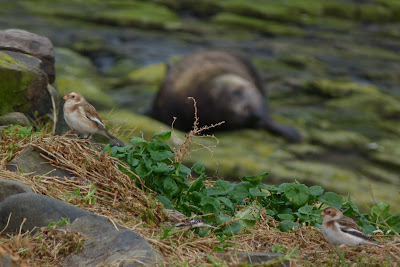 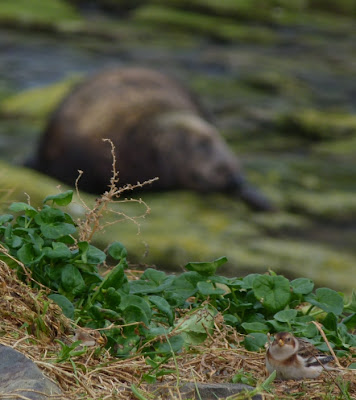 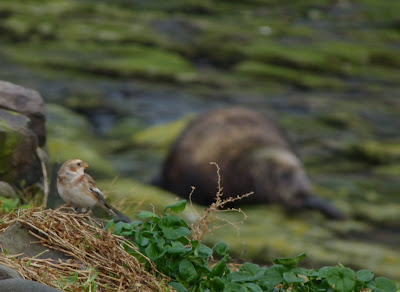 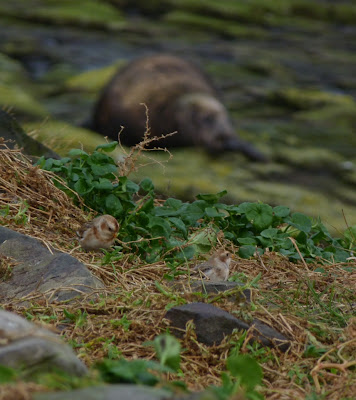 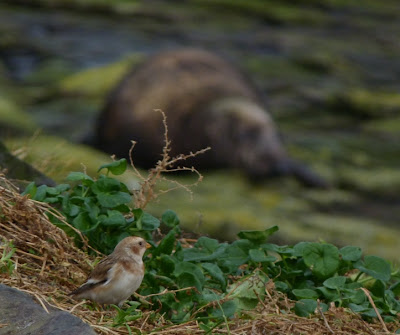 Snow Buntings with Seals.....may have got carried away!
In other news those pesky Leps keep showing themselves with November Silver Y notable while a Herald found hibernating above water tanks on Brownsman. A massive crippler. 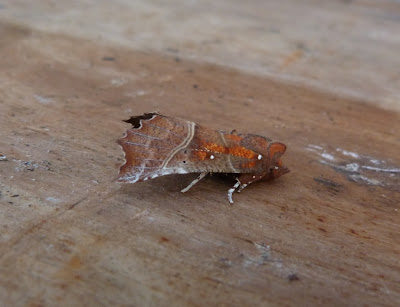 So maybe the weather is changing next to something different from westerly, maybe, possibly. PINE GROSBEAK C'MON!
﻿
Posted by Will Scott at 10:46